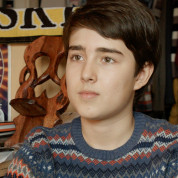 As a 100Hours’ Youth Ambassador, an important part of Ayrton’s work is presencing the idea that, to a considerable extent, we already know what needs to be done in order to solve many of our greatest problems. What is missing is sufficient “will” to do those things on enough scale. That “will” is missing because there isn’t enough care about the issues, and the suffering of those on the receiving end of them.

Ayrton is speaking at the TEDx Youth event at Hampton Court House in June.

Ayrton Cable: “What is missing from our efforts to change the world?”

At the age of 9, Ayrton premiered his film in the Houses of Parliament, and partnered with four major NGOs, proposing a law for clearer food labeling to end the horrors of factory farming. His film is regularly shown in schools nationwide. Inspired by a TED talk on conflict minerals, Ayrton went on to campaign for a “Fair Trade Mobile Phone”, for which he won an Amnesty International Photojournalism Award. His latest initiative, focused on food security, follows his ITV and BBC Radio report from Malawi on hunger as part of the IF Campaign; Ayrton’s “World Food Challenge”, partnered with the UN, challenges young people to ensure everyone in the world is properly nourished, no one left out. He launched the challenge on International School Meals Day and WE Day London at Wembley in front of 12,000 young people. In June, he launches the new Humanitarian Water and Food Youth Awards in Central Hall, London.